Government Of Assam Department of Cultural Affairs Directorate of Archaeology

The Directorate of Archaeology Assam, under Cultural Affairs Department conducted an Archaeological excavation at Alichinga Tengani Archaeological site, Barpathar, Golaghat District of Assam from 25th December 2018 to 15th February 2019.  Dr Deepi Rekha Kouli, Director, Directorate of Archaeology, Assam, in her capacity as Director of the Excavation supervised the entire excavation. The Technical Officer Sri Nabajit Deori, Exploration Officers Smti Chabina Hassan and Smti Nayanika Das, and other officials of the Directorate carried out the excavations.  They were also assisted by a group of research scholars.

The excavation revealed the foundation of a brick structure, rectangular in plan, measuring 15.63m x 10.86 m x 1.47m.  The structure appears to be the plinth of a secular building as no religious remains were discovered. On the western direction of the plinth another brick structure was exposed. From the strategic location of the area surrounded by ditch and rampart the structure found during excavation could be part of an important settlement of early medieval period.  Cultural material findings are few, however scattered finds of iron nails and potsherds have been found in some trenches. After the depth of 1mtr, charcoal/burnt wood remains were found in some trenches, samples of which have been collected for scientific analysis.

Co-relating earlier findings  at Dubarani and nearby areas by this Directorate and epigraphic records as well as other relevant materials found during excavation ,  the exposed brick structure appears to be datable to c. 8th – 9th C.E.  Further excavations in the respective trenches will bring to light the nature of the structure, and will be carried out by this Directorate in the next financial year.

On 28.01.2019, a metallic decorative bangle (probably alloy) was collected from one of the residents near the Archaeological site which was earlier discovered in the ditch adjacent to the ongoing excavation site. 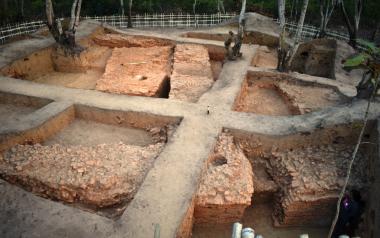